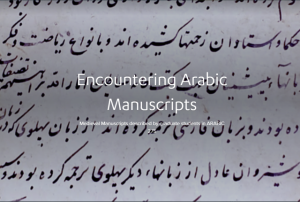 The Near Eastern Languages and Cultures department is proud to share Encountering Arabic Manuscripts, an exhibition in which eight graduate students in Arabic 275 identified a noteworthy aspect of a manuscript with which they were working to create an exhibit artifact.

The ‘Postcards from UCLA Library Special Collections’ are a collaborative project that revolves around UCLA’s exceptional collections of Arabic-script manuscripts, the second-largest assemblage of its kind in North America. In Spring 2022, librarians and staff of Special Collections generously facilitated a hands-on Islamic codicology and paleography course, taught by Associate Professor Luke Yarbrough (NELC). The course drew students from NELC’s Islamic Studies Program, the Iranian Studies track within NELC, and the departments of History and Art History, as well as a visiting Ph.D. candidate from the University of Edinburgh. Students each chose a single manuscript to study throughout the quarter. On the basis of their sustained encounters with these manuscripts—which turned out to range in origin from Istanbul to India, and in subject matter from chronography to theology, the occult, astronomy, and Sufism—they each produced two ‘postcards,’ examining some peculiar feature that they had noticed. The postcards reveal emerging scholars applying new technical skills and vocabulary to UCLA’s rich Islamic manuscript materials, which have rarely been studied in depth.