Asma Sayeed’s book explores the history of women as religious scholars from the first decades of Islam through the early Ottoman period. Focusing on women’s engagement with hadīth, this book analyzes dramatic chronological patterns in women’s hadīth participation in terms of developments in Muslim social, intellectual and legal history. It challenges two opposing views: that Muslim women have been historically marginalized in religious education, and alternately that they have been consistently empowered thanks to early role models such as ‘Ā’isha bint Abī Bakr, the wife of the Prophet Muhammad. This book is a must-read for those interested in the history of Muslim women as well as in debates about their rights in the modern world. The intersections of this history with topics in Muslim education, the development of Sunnī orthodoxies, Islamic law and hadīth studies make this work an important contribution to Muslim social and intellectual history of the early and classical eras. 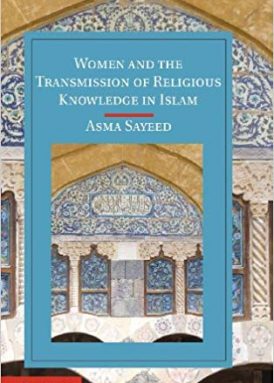