Pre-modern Arabic biography has served as a major source for the history of Islamic civilization. In this 2000 study exploring the origins and development of classical Arabic biography, Michael Cooperson demonstrates how Muslim scholars used the notions of heirship and transmission to document the activities of political, scholarly and religious communities. The author also explains how medieval Arab scholars used biography to tell the life-stories of important historical figures by examining the careers of the Abbasid Caliph al- Ma’mun, the Shiite Imam Ali al-Rida, the Sunni scholar Ahmad Ibn Hanbal and the ascetic Bishr al-Hafi, each of whom represented a tradition of political and spiritual heirship to the Prophet. Drawing on anthropology and comparative religion, as well as history and literary criticism, the book considers how each figure responded to the presence of the others and how these responses were preserved by posterity. 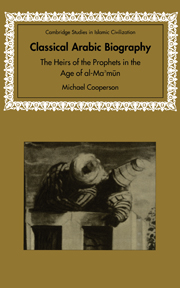