Although my graduate training was in socio-cultural Anthropology, with a BA from Amherst College, MA and PhD degrees from the University of Chicago, and a postdoc in the University of Michigan Society of Fellows, I have worn a lot of different hats ever since. Early on, I spent a summer as a gandy dancer on the Alaska Railroad, replacing and lining track after the horrific 1964 earthquake; participated in a prehistoric archaeology project in France; and took a year off from college to teach middle school in the Republic of Chad, returning to the same country after college as a Peace Corps Volunteer (see http://spotlight.ucla.edu/peace-corps-50th/allen-f-roberts).

At the University of Chicago my PhD advisor was the late Victor Turner, a noted theorist of ritual, religion, and performance studies; and I conducted 45 months of dissertation research on symbolic systems and local-level politics along the southwestern shores of Lake Tanganyika in the Democratic Republic of the Congo. My monograph in historical ethnography, A Dance of Assassins: Performing Early Colonial Hegemony in the Congo (2013, Indiana University Press) is based upon this research, as are my many writings on arts and expressive cultures of central Africa. 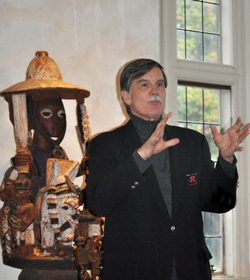